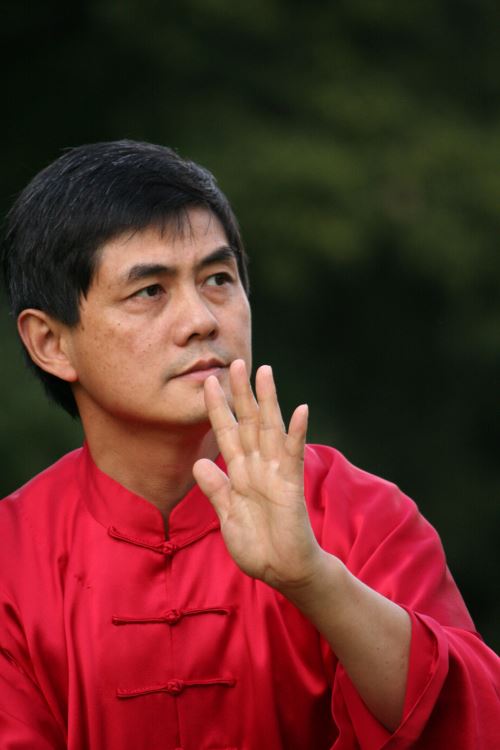 If you look at a line of people standing and waiting, you will see many ways of standing. A good standing posture gives you stability and strength to stand for a long time and the ability to move quickly and efficiently from one posture to another while stepping.

The use of standing postures was an essential part of the development of energy power in the traditional and usually very secretive family trainings. Thirty-seven basic postures determined the study material and were called Taiji37. Each of these postures gives rise to a specific spontaneous movement and the opening of different energy channels. The qi flow in the body is promoted. This has a beneficial effect on physical, emotional and mental health.

The southern style (NanPai) connected the standing postures in a spontaneous way to a taijiquan performance. The northern styles (BeiPai) laid down rigid taijiquan forms. However, the same taiji principles applied to all styles. 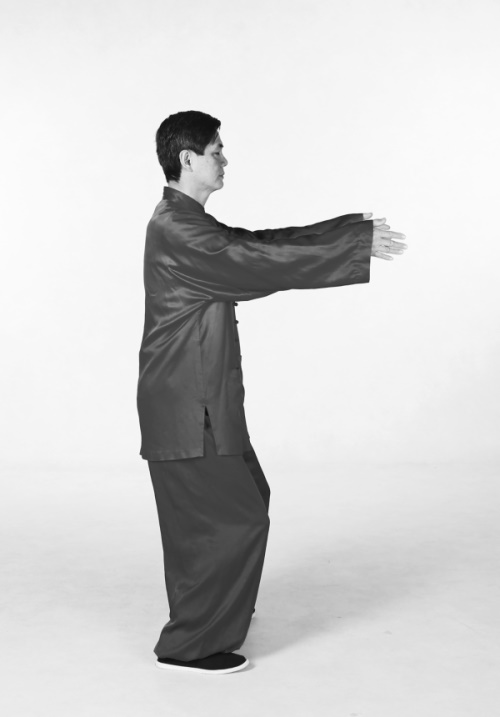 Rooted in an ancient Chinese tradition, TaijiQuan was originally a martial art in which one learned to use qi and taiji forces instead of pure muscle power. The taiji forces developed were used in unarmed combat to eliminate the opponent. The advent of firearms caused a shift from martial applications to healing uses. TaijiQuan is now mainly taught with an emphasis on the health aspect.

The taiji forces are used to promote one's own health. By practising TaijiQuan in the correct way back pains caused by an incorrect posture are reduced, the blood circulation is stimulated without putting a strain on the heart, you acquire a more supple body, a better sense of balance and an increase in concentration.

By using the taiji forces in your daily life, you bring your vital energy (your Qi) back on level and you will feel calmer and more confident. This leads to good physical health combined with a mental balance which improves the quality of life.

NanPai Taiji starts from standing postures. Originally there was no form.

However, for the benefit of the students, fixed forms with a specific sequence of well-defined movements are used as a teaching tool. During the TaijiQuan lessons it is taught how to connect to the upward earth force, to activate the dantian, to use breathing power, to build an outward energy structure, to bring power outside the body, to use mental power; in short, to develop and control taiji forces starting from a well-defined movement. It becomes a search for maximum relaxation without losing the desired posture in the movement with maximum efficiency and minimum energy consumption.

Besides learning the form, a lot of attention is paid to a correct posture. Running a form with an incorrect posture is fatal and does more harm than good. Incorrect posture is the origin of many physical discomforts. A lot of attention is also paid to the application of the language forces in daily life: opening a door, climbing the stairs, sitting down, standing up, ironing, vacuuming, lying down, practising sports, singing and dancing, voice control and writing, making music, digging, chopping, cycling, walking, screwing, sawing, drilling, cutting; ... Every movement of the body can be performed in the taiji manner. In this way the achievements of practising TaijiQuan are integrated into everyday life and taiji becomes a way of life.

The short form TaiJi37 NanPai TaijiQuan is based on the principles of the NanPai (southern) school of TaijiQuan and consists of the 37 basic postures. The form was developed under the guidance of my father Dr. Shen Hongxun. This short form contains almost no repetitions.

The long form TaiJi ChangQuan is based on the Yang family style and consists of 108 movements. It is performed according to the interpretation of Dr. Shen Hongxun / Prof. Yao Huanzi, combined with the principles of the NanPai school. 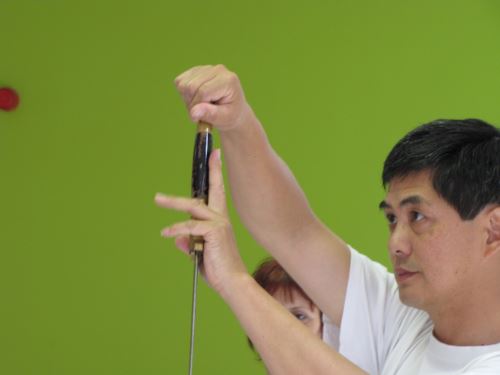 The Taiji sword form is based on the Yang style sword form. The form is taught from the insights of the NanPai principles.

In ancient China the two-edged straight sword was held in high esteem. Besides its practical function, the sword was a symbol of justice, discipline, inner development, moral integrity, honour, wisdom.

The sword is led with uninterrupted attention, a constant focus on the point or cutting edge. The alertness increases. The power of concentration grows. Through the constant mental focus on the tip of the sword, an intense lengthening, expanding, outward-facing energy structure is built up. The abundance of (energy) impulses from the outside world is stopped. One comes into oneself. Concentration turns into contemplative perception. The mind comes to rest. Stress and emotional tension disappear. You stand more firmly on your legs and you become more powerful. The development of energy force can also be used to remove binqi, self-healing or therapeutic. 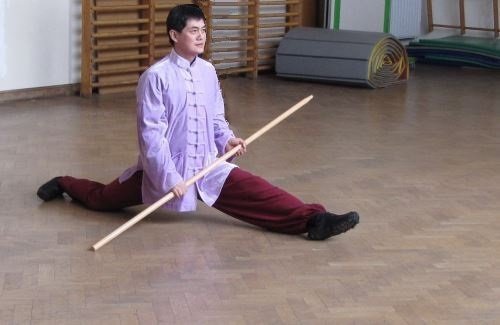 The taiji stick form is based on the NanPai Taiji form. The form is taught with a medium length stick.

The stick, pure simplicity from nature, is the companion of monk and pilgrim, support of farmer and shepherd and a symbol of righteousness. In practised hands, however, the stick turns into a fearsome weapon. The ever-changing handles give the cane a great deal of dexterity. The connection of the stick to the hands makes it possible to move body and stick as a whole in balance. The length and the great reach of the stick develop mastery of the physical space.

The stick is guided with uninterrupted attention, a constant focus on the ends. Alertness increases. The ability to concentrate grows. Through the constant mental focus on the ends of the stick, an intense lengthening, expanding, outward-facing energy structure is built up. The abundance of (energy) impulses from the outside world is stopped. One comes into oneself. Concentration turns into contemplative perception. The mind comes to rest. Stress and emotional tension disappear. Posture improves. You stand more firmly on your legs and you become more powerful. The further development of energy power can also be used to remove binqi, to heal oneself or for therapeutic purposes.

Yin
When you look at the use of a fan, a sense of grace, elegance, sophistication and seductiveness comes over you. Its functionality is artistic and its cooling effect is pleasant. The Chinese fan is undeniably a piece of highly ingenious craftsmanship. The painting often shows an exceptional level of artistry and creativity.

Yang
If you open and close a fan from the dantian during the performance of the form, you will experience the hidden qualities of this beautifully crafted utensil. The explosive character whereby the true intention takes you by surprise, the sudden transition of this innocent-looking, harmless ornamental object into a flashing, viciously cutting, razor-sharp weapon, takes you completely by surprise. Even the sound of the fan unfolding frightens you.

The different postures open the different energy channels. The qi flow and the efficient use and consumption of qi in the body are promoted. This has a beneficial effect on physical, emotional and mental health.

TuiShou / Pushing hands is an exercise with a partner through which you learn to feel and observe where, in yourself and your partner, freedom of movement is lacking. By reacting in an appropriate way at the appropriate moment, you achieve freedom of movement and the practice partner can be brought out of balance. From the development of energy force in yourself, the use and control of it is further developed in practising with the other. Moving from energy power is much more difficult because of the physical contact and the habitual use of muscle power. The use of muscle power is avoided and replaced by the use of energy power.

Touching each other physically, energetically, emotionally and mentally is done in a friendly way and with the greatest respect for each other's individuality. There is no opponent, no winner or loser, only the mutual development of better understanding and handling of energy power by the 'partners-in-crime'. The wellbeing of the training partner is always paramount. 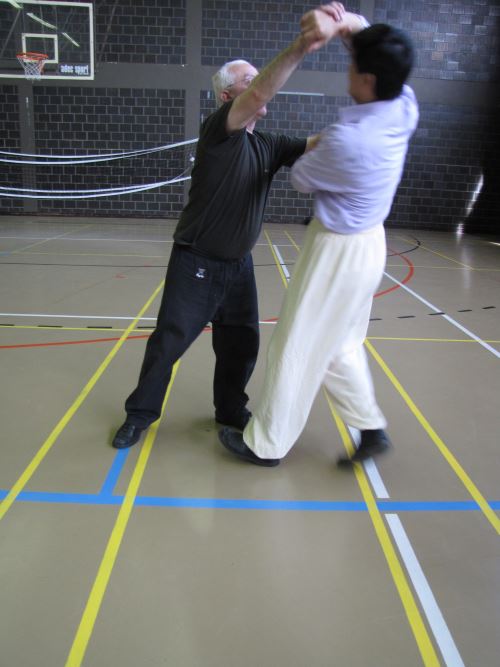 There is no opponent, no winner or loser, only the mutual development of better understanding and handling of energy power by the 'partners-in-crime'.

The main purpose of taiji practice is to develop, control and manage energy force.

Energy force is used in three main areas of application - arts: the body arts, the healing arts and the martial arts.

Singing and dancing, sports and games, work and leisure, daily life - all of these enable us to move and live with energy power. When energy power is present, it is reflected throughout the movement. The movement becomes beautiful, acquires a graceful elegance because the body performs its function as a unit. With further development of energy force it can be used to remove binqi from yourself or your fellow man. Learning to use and apply taiji forces as a self-defence technique is not practised but is an integral part of the knowledge training.