"Partners" organise lectures, trainings and workshops where Master Shen Zhengyu is invited as a teacher.

When you register for participation in an activity of ShenBUQI® International you agree with these general terms and conditions.

• Integrity
Mental, physical and social integrity are central to the activities.

• Wellbeing
During the lessons, always be mindful of your own limits and those of others. It is about an activity that brings well-being to yourself but also to others. Be considerate of each other. 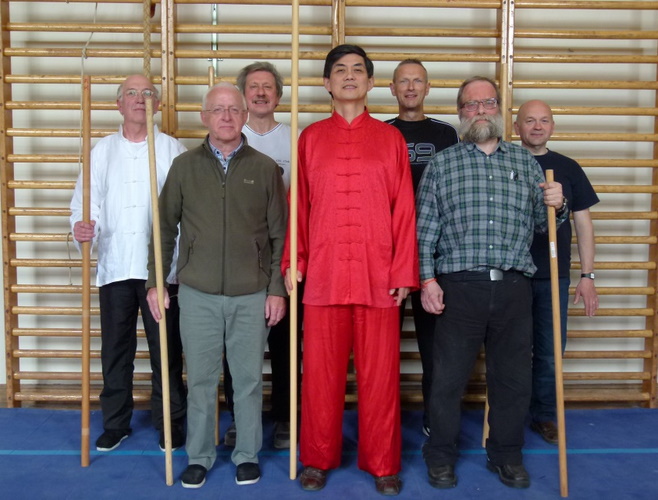 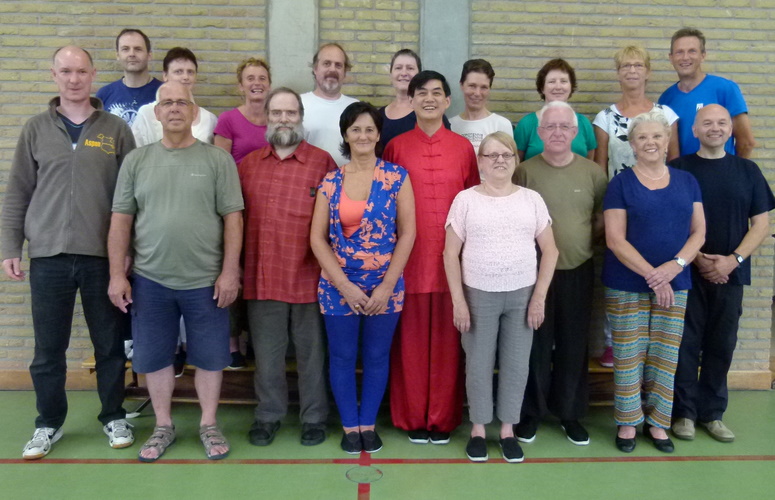 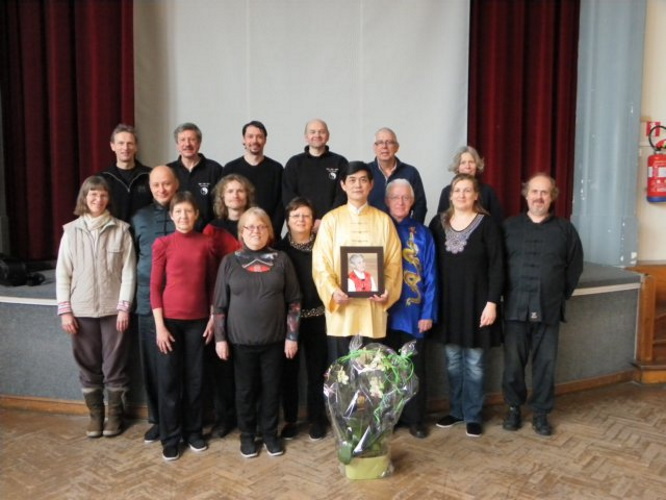 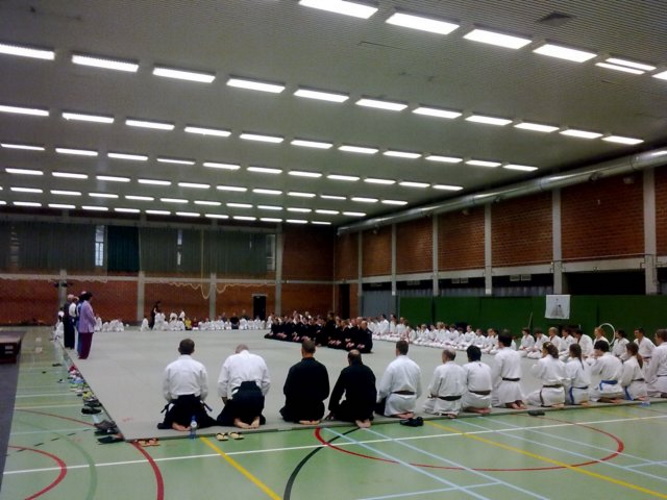 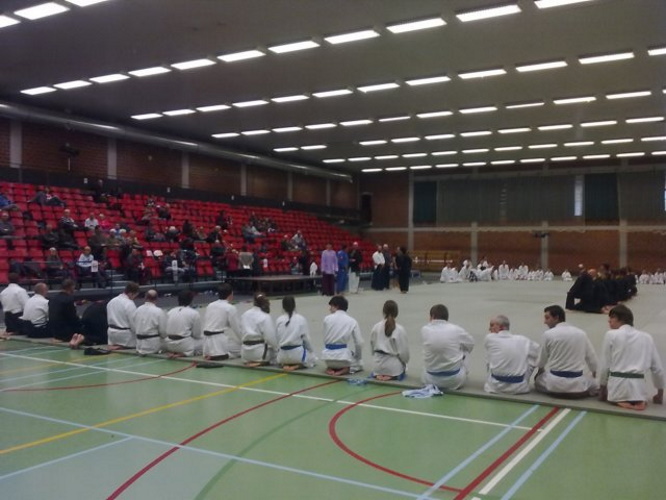 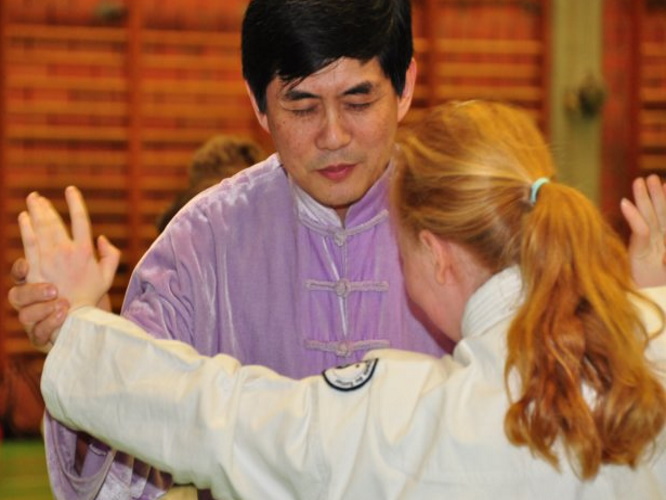 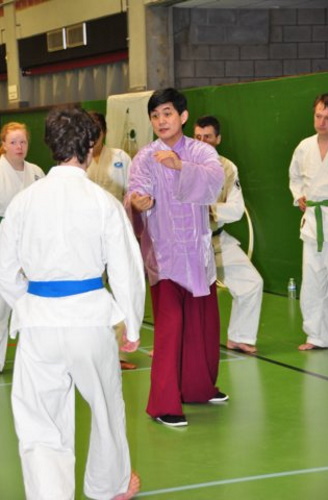 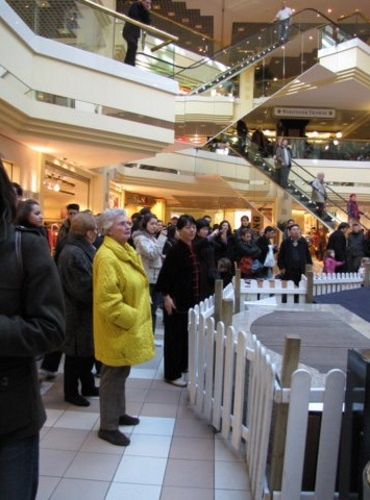 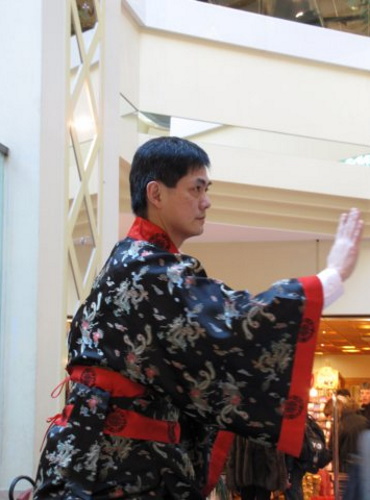 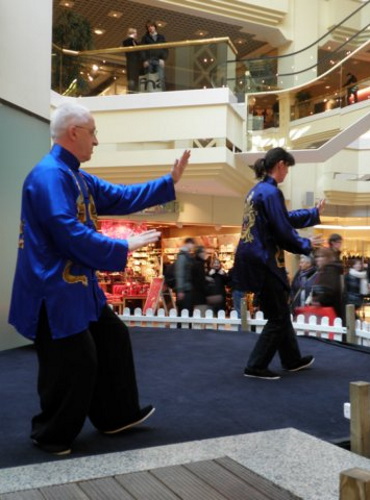 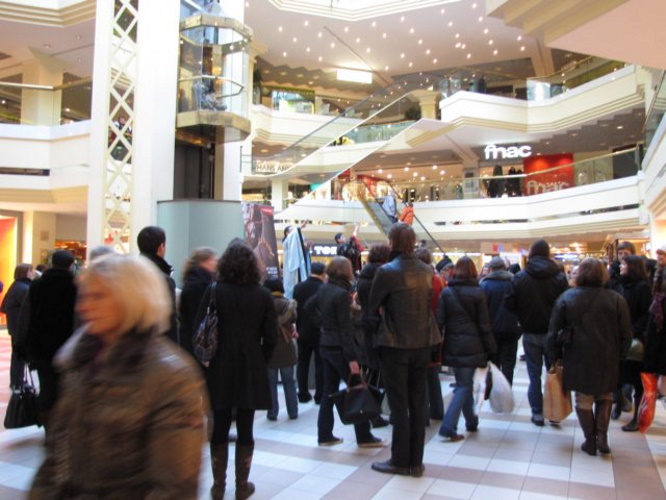 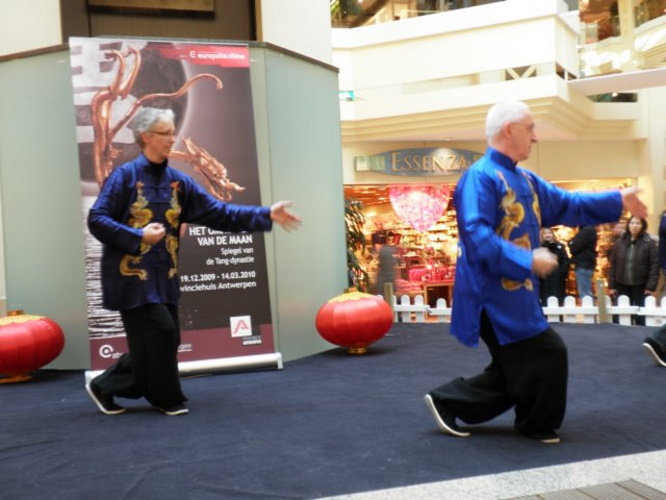 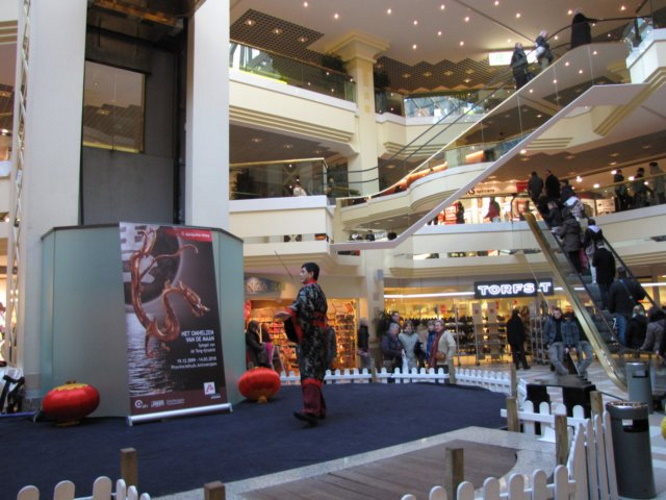 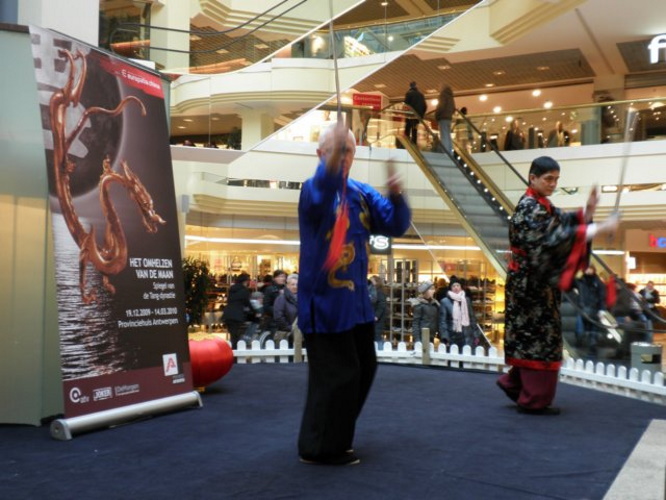 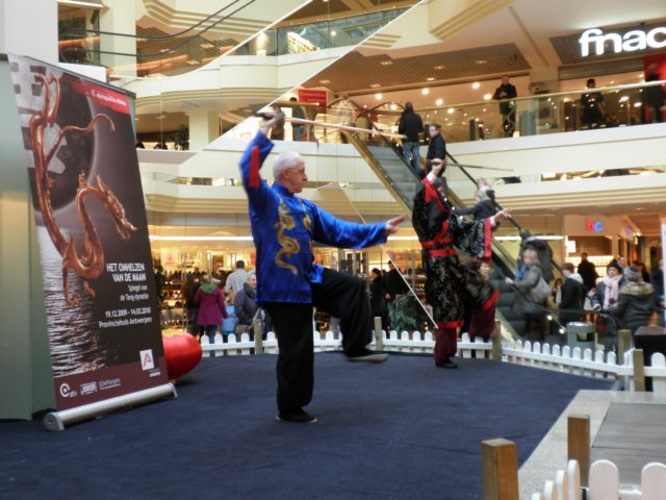 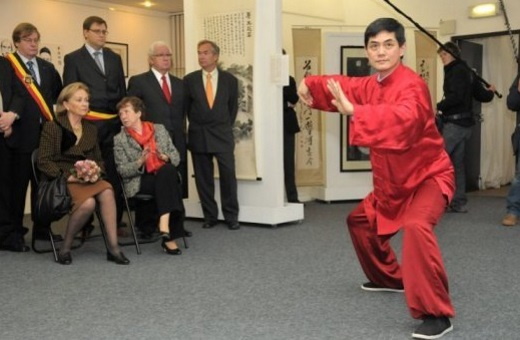 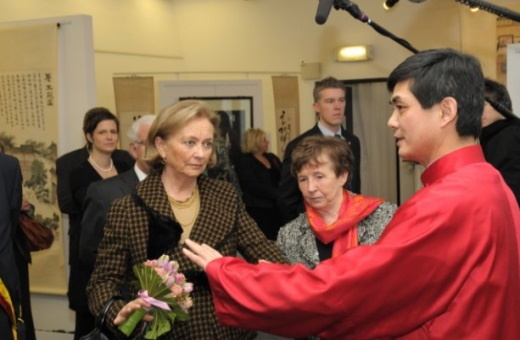 The books are available at courses given within the Dr. Shen Hongxun - Shen Zhengyu lineage. 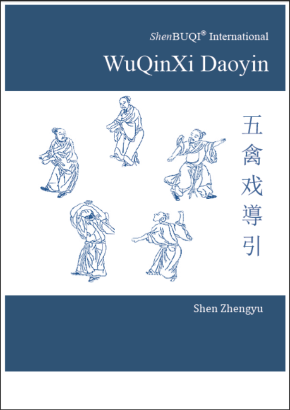 View an excerpt from the book View an excerpt from the book

Binqi
Pathogenic qi.
Qi that is harmful to the body.
BUQI®
Treatment system developed by Dr. Shen Hongxun, in which the double vicious circle and the removal of binqi by using taiji forces are the key elements.
ShenBUQI®
Continuation of Dr. Shen Hongxun's BUQI® system by Shen Zhengyu.
Dantian
It usually refers to the lower dantian. The dantian is located in the lower abdomen, is a centre of production and distribution of qi (vital life energy).
Daoyin
The word daoyin consists of two separate concepts. Both 'dao' and 'yin' have the meaning of leading. Together, they describe 'exercises in which a clear objective is pursued'; in this case, the promotion of physical and mental health. Old word for qigong.
Jing
Concentration of the inner energy "force". (Not muscle power)
Kungfu - Gongfu
The acquisition of skill through prolonged practice.
Negative abdominal breathing
Breathing technique where, while inhaling, one gently retracts the lower abdominal muscles (between the navel and the pubic bone) and slightly raises the perineum. While breathing out, you relax the retracted lower abdominal muscles and the perineum sinks back in.
Opening up the joints
By performing the correct relaxation technique, it is possible to create more space within a joint.
Quan
Fist
TaijiQuan: unarmed combat according to the principles of taiji
Qi
Energy in the body. This is developed through sensitivity, breathing and movement, internal processes and Chi Kung exercises.
Qi is an old word with many different meanings. In human terms it means vital life energy.
Qigong
The word qigong consists of two separate concepts. Qi simply means 'energy' and gong means 'skill'. Qigong is a collective word for all kinds of practice systems which optimise the function of qi.
Relaxing
Physical: relaxing the muscles so that the tendons are freed from tension and more space can be created in the joints - looking for the minimum of tension to maintain a posture. Too much emphasis on relaxation often leads to the collapse of the body. This is to be avoided at all costs.
Spontaneous movement
Movement of the body in which the self-regulating system of the body has the initiative. The consciousness is an observer of this movement.
Taiji - Taichi - Tai Chi
Taiji is a philosophical concept from Taoism. Taiji arises from Wuji. Taiji represents the creation of an Taiji represents the creation of an energetic polarity which is constantly changing and which merges into one another. All phenomena arise from this polarity. It is represented by the yin-yang symbol. Literally translated: the highest principle.
TaijiQuan
Originally, TaijiQuan was a training in unarmed combat according to the principles of taiji. Important is the development of inner strength rather than just muscular strength. In the twentieth century TaijiQuan underwent an evolution evolution from fighting technique to health. Performing a series of successive movements - the form - is the means.
TaijiJian
idem TaijiQuan - with a double-edged sword.
TaijiGun
idem TaijiQuan - with a stick.
Taiji schools - Taiji styles
The different styles reflect the richness of interpretation and training. Each style has its legitimacy. A distinction is made between the Northern School (BaPei) and the Southern School (NanPei). The Northern School is characterised by its defined form and strong military-martial background. The major family styles Yang, Chen, Wu, Sun, Wu-Hao, ... are part of the Northern school. The Southern style is The Southern style is based on basic postures which can be spontaneously connected at will. Interactions, mixtures and cross-pollinations are frequent.
TaijiJin
Taiji forces - inner forces.
Vicious circles of binqi
Fundamental basis of the ShenBUQI® system. Circles that represent an attitude on a physical, emotional and mental level. These circles, reinforcing each other, cause accumulation of binqi which eventually can lead to energy disorders.
Wuji
Wuji is a philosophical concept from Taoism. Wuji is that which is before creation, a state of complete emptiness, the primal chaos. Literally translated: without principle.
Wushu
Martial arts, the umbrella name for fighting techniques in China.
WuXi Qigong
Continuation of the Taijiwuxigong system of Dr Shen Hongxun and Dr Xia Tingyu by Shen Zhengyu.
Yi
The mind and mental power. These are developed through concentration, meditative exercises, vigilance, attentiveness.